Expert guides, spa treatments, endless plains and stargazing after sundown. Mahali Mzuri is more than your average safari camp. Located in the private Olare Motorogi Conservancy, this small-scale luxury safari camp offers guests an exclusive safari experience in one of the most wildlife-rich parts of the Mara ecosystem. Mahali Mzuri means 'beautiful place' in Swahili, a name that is more than fitting.

Go for a swim in the camp's swimming pool.

Take to the skies

The lodge is renowned for an incredible food experience.

Children aged 2 and older are welome at Mahali Mzuri.

A selection of refreshments available in each room.

Indulge yourself in a spa treatment (additional cost).

Wifi is available at Mahali Mzuri.

This safari camp's name says it all. Mahali Mzuri is Swahili for 'beautiful place'... and the name could not have been more appropriate. Nestled against the northern edge of Kenya’s Masai Mara National Reserve, this camp is one of only five safari camps allowed to operate in the exclusive private Olare Motorogi Conservancy. The conservancy is home to a stunning array of wild animals ranging from elephants and wildebeests to lions, zebras and leopards. The entire area is brimming with life and the camp's professional Maasai guides and trackers know how to track even the most elusive of beasts. The scenery is stunning and only adds to the romantic 'Out of Africa' feel most guests experience during their stay here. What's more, you won’t have to drive far to start spotting game. The adventure starts at the camp's front doorstep.

There are plenty of wild animals to spot all around the camp. You may even witness a wilderness turf war as there are several different lion prides living within the borders of the conservancy. They are known to occasionally battle it out for dominance of the area. There are also approximately 150,000 wildebeest living in this area. They seem perfectly content to stay put where they are and are not a part of the epic 'Great Migration' that takes place annually. During the Great Migration up to one million wildebeest, accompanied by thousands of zebras, gazelles, eland and topi migrate through Tanzania and Kenya through a total of 1,600 kilometres. Predators such as lions, leopards and hyenas take advantage of the great parade of animals passing through the lands and can be seen in large numbers during the Great Migration. The Great Migration arrives in the conservancy sometime in the months July through September and leaves around November to return to the Serengeti in Tanzania.

Mahali Mzuri is truly next level in terms of comfort and luxury offered to its guests. In addition to twelve luxury safari tents the camp is home to a warm and inviting centrally located main tent. The main tent has a very laid-back and relaxing lounge area with an open fireplace, a library filled with books, iPads for complimentary guest use, an iPod docking station and speaker system, a games console, and television. Binoculars are available for complimentary use, although it might be better to bring your own. The main tent has a large deck where breakfast and lunch are served at a large communal table that seats up to 24 guests. One of the most appealing features in the common area is the camp's lavish twelve metre infinity-edge swimming pool (which can be heated when temps drop). The camp's Nasaro Spa is another prize feature at Mahali Mzuri. The spa tent offers guests a stunning view of the bush during relaxing massages.

Situated on a ridge above the river, each of the safari camp's twelve tented suites is beautifully decorated and fully decked out for comfort. There are six tents on each side of the main tent in the common area. The furthest guest tent is located a five-minute walk away from the main tent area. The view from each of the guest tents is simply stunning and will keep you gazing out upon the horizon. The tents are decorated in an atmosphere of safari nostalgia, complete with heavy leather couches, dark-wood furnishings and some splashes of colour. Of the twelve tents there are ten comfortably accommodate two adults (with a four-poster king-sized bed or two twin beds) and two tents are larger and can accommodate two additional guests of fifteen years and younger. In total, up to 24 guests can be accommodated at Mahali Mzuri at any given time. Inside each tent guests you'll find creature comforts such as an en-suite bathroom, a private deck and amenities such as a Bose iPod dock, a Nespresso machine, free bottled water, a minibar and Africology bath products.

There are two family safari tents that include a sofa bed for children to sleep on. The camp will also provide families special meals for children and have special activities specifically geared towards children on safari. They can for instance take part in beading lessons provided by a local Maasai tribeswomen or they can take part in beginner's archery classes. Children receive their own 'bushbaby bag' when they arrive at the camp. The bag is filled with colouring books, nature-trail games and a cap. Families of four and up are also offered their own private safari vehicle during game drives. Children eight years and over are welcome at Mahli Mzuri.

From early morning to late at night, the staff at Mahli Mzuri does its utmost to ensure guests enjoy a memorable stay. The camp's chefs use locally sourced produce to create mouth-watering masterpieces for every meal and all meals and drinks (even fine champagne) are included in the price of your stay. Guests can help themselves to anything they desire at any time of day. If you have special dietary needs, just let the camp know ahead of time and they will prepare meals accordingly. The camp's chefs create menus that are influenced by a variety of cultures (local and international).

You can expect freshly baked breads and pastries, bush BBQ's, champagne picnics and sundowners with very tasty appetisers and your favourite drinks and cocktails. You'll sit down to eye- and palate-pleasing meals in the open bush, on your own private deck or in the common dining tent. Breakfast is generally served as a continental buffet and includes a la carte hot dishes. You can also opt to grab a quick snack in the morning before heading off on an early morning game drive. Another alternative would be to have your guide bring along a packed lunch for a fully decked out breakfast in a scenic location in the bush.

Lunch is usually enjoyed out on the main deck on individual tables and guests can dine a la carte. If you're in for a quick bite before dinner, you can enjoy an afternoon tea before heading out on an evening game drive. Dinner is served at a large communal table in the bush or can even be served in a more intimate setting for two. Occasionally the camp offers dinnertime entertainment in the form of Maasai dancers by campfire. After a long day of safari, we recommend asking the bartender for a Kenyan Dawa. It’s a cocktail made up of vodka, lime juice and honey. The name is Swahili for 'medicine'.

There are plenty of things to do and see while staying at Mahali Mzuri. The camp has a full range of activities on offer. Two safari game drives per day are included in the price of your stay. You can choose from early morning game drives and evening game drives, each offering a unique and exciting vantage point for spotting animals. If you're up for something a little more adrenaline rich, you can book a hot-air balloon safari (not included in the price of your stay). If you're spending more than just a few days in the conservancy, you can also consider taking a day trip into the actual Masai Mara National Reserve (surcharge may apply).

Another memorable option provided by Mahali Mzuri is the opportunity to learn more about Maasai culture and traditions. Your guide can take you on a tour of a local Maasai village which lies just a short drive away from the camp. During your visit to the Maasai manyatta (village) you will learn more about how houses are built by the Maasai women, how responsibilities are divided up within families, you'll receive a guided tour of a traditional Maasai home and cattle holding area and you'll even be invited into one of the homes for tea and receive a basic lesson in Maa (the Maasai language). This will give you an idea of what life is like in a Maasai community. If you like you can also visit the local Maasai markets.

Book your Masai Mara safari adventure at Mahali Mzuri for three nights and stay an extra night free of charge! This special offer is valid for arrivals between 9 January and 14 June, and between 1 November and 21 December 2023.

The tents were gorgeous with a patio overlooking the vast landscape. I saw elephants and giraffes while drinking coffee in the morning. The pool is gorgeous, also with a spectacular view. Highly recommend!

The lodge is beautiful, overlooking an area where elephants, giraffes and buffalo wonder through. When we walked in and were greeted by a herd of elephants, I knew this was the right place for us.

What about the price? Indication: $$$$$
Hover or tab the price for your local currency 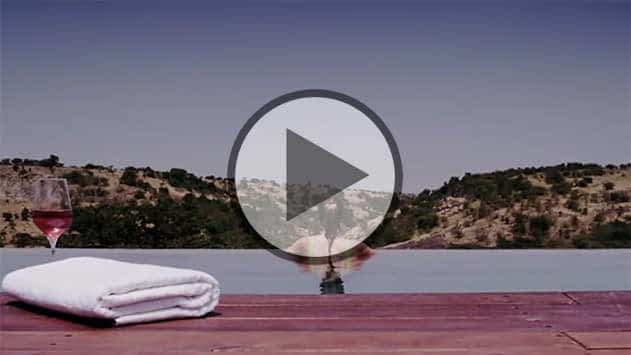 Getting to Mahali Mzuri

Included in your stay

Excluded in your stay